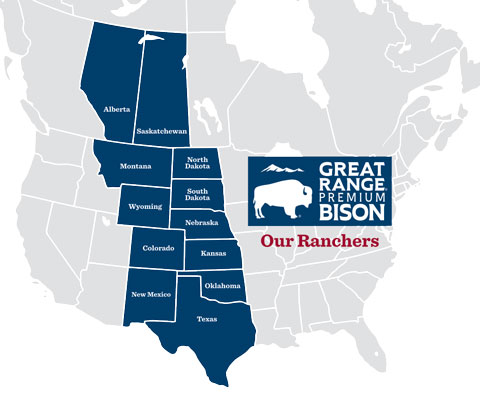 The bison industry in North America is very small and primarily made up of small family ranches on the high plains of the United States and Canada. This little industry has been through many ups and downs over the past 30 years. We’re proud of the hardworking, committed bison ranchers we have partnered with along the way. At Great Range Bison the ranchers we work with are our friends. It is with their dedication and passion for raising bison using the best practices that we can deliver to you, our customers, this healthy red meat that you will enjoy time and again.

Located near Nipawin, “Saskatchewan’s Playground”, Beldon Bison Ranch covers an area of approximately 4800 acres.   The ranch is owned and operated by Don, Paulette and their son Nathan along with his wife Amanda Scott. Don and Paulette started it all in 1987 with just 160 acres, 10 bred cows, a breeding bull and the lofty goal of becoming full time ranchers and creating a sustainable operation to be passed on to the next generation.   Many acres, many animals and miles of fence have been added over the years.  Don left his work as an electrician in 1992 and Paulette left her job as a legal secretary in 1996.  Nathan left his work in Oil and Gas in 2011 to return to the ranch full time.

The Duncan family has owned the Diamond Tail Ranch since 1979. In 1986, Mike Duncan, the family’s managing partner, introduced Buffalo to the ranch. The advantages soon became clear and a switch was made. The ranch is located in a large mountain valley of Northern Colorado. Today our primary herds consist of Buffalo and Corriente cattle. The ranch manager, Scott Butcher, handles all breeding herd operations and hay production. Scott has many years of experience with livestock handling, nutrition and health.

Our first ten head of bison were imported from Idaho. Our business growth was rapid, only to be slowed down by the collapse of the bison market in the early 2000’s and drought of 2003.

We continued to believe there was something about this industry that was worth the effort. In 1999 we started the farmer’s markets, followed by our meat store a couple years later. This portion of our business continued to grow and allowed us the margins required to continue the ranch.