The importance of bison dates back thousands of years, starting with Native American tribes. They were used to make shelter, utensils, shields, weapons; and were used in ceremonies. They were also considered a sacred animal and religious symbol. The “white buffalo” in particular had significant spiritual relevance to females in many tribes. 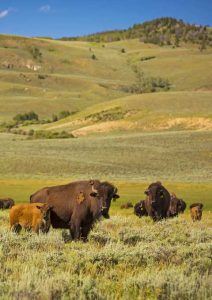 The same importance and passion is a part of how we run our business today. We are very committed to the humane treatment of bison. We purchase bison from many small family ranchers, who care about how bison just as much as we do. One element of this is quite simple. Bison require less management than other ranch animals, and they are allowed roam freely. All of the cows and breeding bulls spend their entire lives on pasture, and are only handled once a year in early winter. Bison are not herded like cattle but can be led via the “feed truck”, that they know leads them through a gate to fresh grass in another pasture. Mother Nature has perfected bison over thousands of years to thrive on the native grasslands, just as intended.

Bison are nourished in a “free choice” environment. They feed on grass, alfalfa hay, shrubs or forage; with a very small amount of grain towards the end to insure consistent quality and a flavorful taste to consumers.

Breeding takes place naturally in July through September, and no artificial insemination or embryo transfer technologies are used. Our bison are not castrated, dehorned or branded.

In short, we allow bison to be bison, and just let them roam as they always have.

FIND A RETAIL LOCATION NEAR ME >